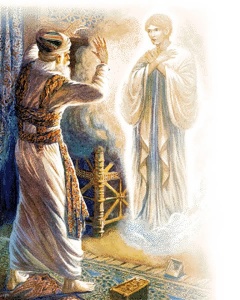 What follows here and over the next few days in That Reformed Blog will be entries rarely seen by human beings: the personal logs of a commander in the armies of heaven on field assignment to Bethlehem, Judea, late in the reign of Herod the Great. Any similarity to a midrash is entirely fortuitous.—James Hart Brumm

Personal Log of Gabriel, Messenger First Class, Trumpeter Second Class,
Advance Unit of the Assault Division, Armies of the God Who Is and Was and Is to Come
(also known as the “Heavenly Host”)

Completed a delivery of Good News to the Temple of God’s Chosen People in Jerusalem today. It was an appearance in the Holy of Holies in the new Temple, the one being built, oddly enough, by the current Jewish king, who is neither a real king—Caesar Augustus of Rome is in charge, and Herod is a rather unimportant, third level functionary, not even from the Davidic line—nor really Jewish, save by conversion. He is building the thing as a gift to the people, to gain political support; in some places and times they call this a “pork barrel project.” The best part, as with any such project, is that he is giving his subjects this gift and making them pay for it.

Well, the Holy of Holies is an odd place. It was built in the original Temple to house the Ark of the Covenant, but that has been absent for generations now. And, after all these centuries, these people still don’t get the idea of the Boss being omnipresent. So they have this huge, empty room, built by a politician to buy off the religious folks, meant to contain One Who Cannot Be Contained—with a curtain for a door, at that—where they send a priest in by himself once a year to commune be in the Divine Presence that is all around them, all the time. I have asked the Boss a bunch of times, and he always mutters something about free will and needing to let them find their own way for the thing to work.

So I met this priest named Zechariah in the Holy of Holies. He’s a good sort, and so is his wife, Elizabeth—honest, work-a-day folks, nothing spectacular by human standards, but just the sort of people the Boss takes a shine to. I was sent with a Divine message: it seemed that the Boss, who talks about not interfering, about letting the humans find their own way and free will and all that rot, tells me there’s a difference between the consequences of free will and a back door escape left by grace. It doesn’t make sense to me, but when the Creator tells you to go with the flow . . .

I tell Zechariah that he and Elizabeth are finally getting their wish, to have children. Of course, it seems a little late: they’re more of the age where they should be putting their nest egg into a nice, low maintenance place in a 55-and-older kibbutz. So it’s perfectly legitimate to ask questions about how this is all going to work, and what is in store for their son, and how he will fit into this grand salvation plan. Those would all be good questions.

But the one he asked wasn’t good: “How can I be sure of this?”

One can question how any of this makes sense. One can question who I am, and how I got into the place, and what’s with the wings (Seriously, just because one prophet thinks he sees wings in a vision, I have to put these bloody things on every time I relay an official message). But nobody, I mean nobody, questions whether the God Who Is will do as God promises. And nobody, I mean nobody, asks me if I know what I am talking about.

No, half of what the Boss says makes no sense to me, but you still don’t ask that.

But Zechariah had the temerity to ask. Puny, mortal, mud-pie-with-a soul doubted the Divine Word.

So I took his voice away. Hey, any more questions? No? Not so glib now, eh, Mr. Smarty Priest?

Well, the mission was accomplished. Probably even more quickly, since Zechariah should have a lot more free time. His primary job as a priest is saying, even intoning prayers, so he should be able to stay home and do with Elizabeth whatever the humans do to get babies, right?

Ehhhhhhhhh . . . the Boss didn’t seem to think so. The Boss says free will means we don’t get to go around smiting any human who annoys us.

I said I’m military. I’m a good angel. I know all about faith in what is unseen and following orders, and we have to keep the others in line.

The Boss didn’t buy it. Says I will have to do better with the next mission . . . which, I guess is coming right away. The Boss won’t replace me—more of that grace stuff. So, I’m getting ready to be deployed again.

I am pastor and teacher at Blooming Grove Reformed Church (RCA) in DeFreestville, just across the Hudson River from Albany, New York, and Director of the Reformed Church Center at New Brunswick Theological Seminary. A historian and a hymn writer, I have been known to force groups of people to sing on occasion. View all posts by James Hart Brumm