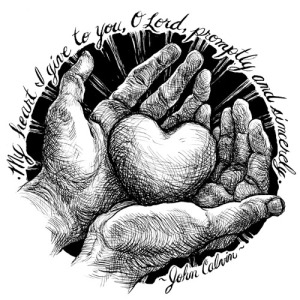 A couple posts ago, I challenged Reformed thinking on hell. In this post, I am challenged by Reformed thinking on communion- specifically, the sursum corda. Anything that sounds like spiritual escapism causes me to break out in theological hives. And the traditional Reformed call and response “Lift up your hearts!” “We lift them up to the Lord!” Is about as escapist as it gets. Am I expected to believe that God is not already here present, that I have to lift my heart like a gift that God will choose to accept or not?

My first draft of this post was kicking against the sursum corda. And then I sought some advice from Professor Todd Billings at Western Seminary, and I saw that the sursum corda has nothing to do with spiritual escapism, and it might just have a profound impact on how Christians view our public witness.

“Lift up your hearts!” Reminds us of one central fact- Jesus, in a very important way, is not here. Yes, Christ’s grace and comfort is with us always, but Christ is incarnate and therefore cannot be physically everywhere at once. It’s what makes a Reformed perspective on communion so compelling- it addresses the physicality of Jesus post-Resurrection. So where is Jesus right now? As the creeds would say, Jesus is “seated at the right hand of God.” Jesus reigns- this is the good news!

The sursum corda reminds us that, while God’s horizon is always the enlightenment and repentance of the world, Christ currently reigns over the world and above the earthly powers and principalities (a la Colossians). Much of Christian public witness seems to forget this reality, and instead focuses on trying to force cultural powers (political and economic) to enforce the Kingdom on behalf of the Church. And so how does the sursum corda instruct witness?

In some ways, not by much. I will still advocate for just laws because I believe that just laws are better than unjust laws, and that God would have the world be run justly. But that will be a byproduct, not an endgame. An appropriate endgame is the transformation of the Church to be more just, no matter what the cultural context. An appropriate endgame realizes that Christ works through the transformation of a servant-minded Church and not through domination and coercion. In the book “World Upside Down” by Rowe, Paul’s ministry is described as societal change because of Christian witness and a constant defense before Rome that the Church had no aspirations to rule the world. After all… they knew the One who already did.

So lift up your heart! Leave behind the desire to enforce the Kingdom through force and take on the Spirit of the enthroned and humble servant.

4 thoughts on “Why lift up my heart?”