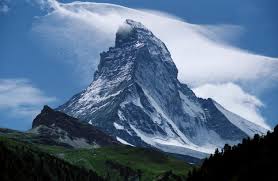 They’re doing extensive road construction on the road that runs right by the church where I work. Because I don’t drive a car, I have an awesome, hot pink, tricycle with a basket on the back. I can fit $100 of groceries into that baby. I love my bike. I wouldn’t be able to live nearly as independently as I do without it. We knew they were going to be doing some work along this road, but I don’t think any of us who work at my church were expecting this. In the space of seemingly a day, this road went from a fairly busy main artery through our city to a stretch of land that looked like it’d been hit by the apocalypse.

Because I come from the other side of the street and eventually have to cross this main thoroughfare (usually with the aid of a traffic light–which were now all all blinking constantly since the flow of traffic was messed up anyway), how was I going to do this? I had to get over dark black gravel that once been smooth, solid blacktop, to the other side of the street where I needed to go up in order to get back on literally solid ground. The torn up lane was down to bedrock and thus lower than the one remaining west-bound lane that was still open. As I surveyed the change that had occurred overnight. I jokingly thought to myself, “I wonder if this gives me a pass from going into work?” But of course it doesn’t. I want to go to work, and more than that, if my coworkers can make it, so can I.

So the problem-solving portion of my brain kicks into high gear as I scan my options, and all of the sudden, I see it. There, in the middle of all that rubble, was a ramp leading over the gravel and sloping gently upwards to the other lane, on the other side of which, was my church.  That was how I was going to get to church from now on. So slowly over the bumpy gravel I go, very deliberately moving my legs in a bicycling motion, hoping my muscles don’t all the sudden decide to go into nervous spasm. There, I’m over the gravel. Now wait for the cars to clear, shoot into the other lane, and pedal until you reach the church lot, just ten feet away if I cut across the lane at an angle. Well, my legs did freeze up  as I angled my way across the lane. I couldn’t make a full rotation over the top of the pedal. But I kept pumping like I do when that happens, and kept moving. And traffic mercifully waited for me, so I I didn’t meet Jesus that morning.

Not exactly the most comfortable thing I’ve ever done, but it wasn’t bad, and has gotten easier as I’ve done it over and over. As I was doing it though, this verse popped into my mind: Every valley shall be raised up, every mountain and hill made low; the rough ground shall become level, the rugged places a plain. And the glory of the Lord will be revealed, and all people will see it together. For the mouth of the Lord has spoken (Isaiah 40:4-5). I faced the mountain. And I saw God. Okay, so it wasn’t a mountain. And it wasn’t the visible hand of God that created that construction ramp (A massive piece of equipment did. But God made the person who made the equipment!). And my crossing some construction successfully is nothing compared to the in-breaking of the power of God. When God asks us to do the impossible, we may do what we can to “prepare the way”, but ultimately, it is GOD who does most of the work. God. Not me. Not you. God. I have a feeling that if we could see what we do compared to what God does, what we do would be just peanuts. No, not peanuts. Peanut dust. The stuff you can hardly get up with a vacuum cleaner.

It’s something that I’ve needed God to tell me over the last couple of weeks. God is asking me to do something that hits just about every trauma-related trigger I have, and to say that’s paralyzing is an understatement. In fact, for about the past week, I just stood looking up at my proverbial mountain and said, “Whoa. That’s a big mountain. Let’s just stand here and look at it for awhile.” Some people charge forward into danger when they’re overwhelmed. Or they become a deer-in-headlights. I fall into the latter category. So I just stood there, for the longest time, not saying anything. How  was I going to do all of this, all at once?

And then I heard these words: You don’t have to do it all at once. Break it down. This letter that I’m asking you to write, this you can do. And when you get that done, you’ll make five phone calls. Not all of them. Just five. This letter is a thank-you to someone for helping me to do what I could not do by myself. It pains me to admit that I can’t do it all. For better or worse, my parents raised a very independent daughter, and dependence feels shaming sometimes, even when I know it’s not. Even when the thing I’m asking for help with is bigger than I am. So as I was writing this letter, I needed a verse to express my gratitude to these people I love so much. And this verse pops into my head: I thank my God every time I remember you. In all my prayers for all of you, I always pray with joy because of your partnership in the gospel from the first day until now, being confident of this, that he who began a good work in you will carry it on to completion until the day of Christ Jesus (Phil. 1:3b-6).

Now, I could’ve said, “Wow, it’s really cool that I know those verses! But I know better. I faced the mountain (of not wanting to admit my need for help), and I saw God. God is the one who put the verses in my head, and God is the one who carries the work forward to completion. Not me. God.

The verse from Isaiah also reminds me of another story in Genesis 22, where God has commanded Abraham to sacrifice his one and only son, Isaac, who was supposed to be the beginning of the nation God would establish through Abraham. But Abraham does what God asks. He prepares his son for the journey to a mountain which he knows will likely end in his son’s death. I’m sure Abraham doesn’t understand. And what Abraham says when he and his son finally see the mountain where God has called them to go is nothing short of amazing: [Abraham] said to his servants [who had come along], “Stay here with the donkey while I and the boy go over there. We will worship and then we will come back to you” (vv. 4-5).

We? How was there going to be a we? Abraham was going to kill his son at God’s bidding! Only he would be coming back down the mountain! There are two theories for why Abraham said this the way he did. First, perhaps God really wouldn’t allow what he was asking Abraham to do. Or second, perhaps God would require Abraham to slay his son. But Abraham believed that God also had the power to raise his son. Abraham faced the mountain. And he saw God. Literally. The angel of the Lord stayed his hand and stopped him from killing his son.

The way this story ends is also poignant: Abraham looked up and there in a thicket he saw a ram caught by its horns. He went over and took the ram and sacrificed it as a burnt offering instead of his son. So Abraham called that place The Lord Will Provide. And to this day it is said, “On the mountain of the Lord it will be provided” (vv. 13-14). Abraham faced the mountain. And he saw God. He saw that God has power. That God works. That God is the one who provides in our weakest, scariest moments.

So when you’re faced with that mountain, whether it’s a huge project at work you don’t feel equipped for, plans in your life that aren’t going the way you thought they would, injustice that makes you want to scream and cry, or worry for a loved one that feels like a mountain all its own, I hope you can do this: Go to your mountain. When God shows you that one step, take it. I can almost feel God’s hand lifting up my foot and placing it in the next step. It’s only one step, it doesn’t seem like much, and I didn’t even do it by myself, but that step leads to another, and another, and another. Someday, you and I will reach the top of this mountain. Before you continue on to worlds unknown over the next ledge, take a moment to face back down the mountain and see the work of God.

How about you? Where have you seen God’s work or provision lately?

Jill Vande Zande lives and works in Bakersfield, CA, as a campus minister for InterVarsity Christian Fellowship. She enjoys wrestling with the insightful questions and observations her friends bring to the table. To be honest, she enjoys pretending to be a college student again too--and a good cup of coffee. View all posts by Jill Vande Zande